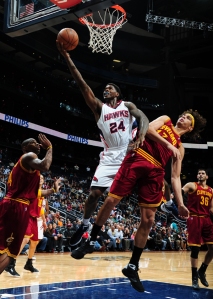 I still don’t think the Hawks have a big season ahead of them without Al Horford on the court. But, they can still beat up on the franchise that represents the only city that Atlanta has defeated in a major sport’s championship game.

Just the other day, valmikcle was telling me how the Cavaliers were looking all right. Probably not good enough to make the playoffs, but trending positive. He also noted that young Kyrie Irving was coming along swimmingly. (In addition to being a long suffering Mistake by the Laker, my fellow blogger and all-around great American is also an unapologetic Duke-bag.)

All evidence to the contrary tonight. The Hawks shredded the Cavs, winning by 27 at home in the Highlight Factory (which often doubles as the Lowlight Factory). I won’t belabor this point, as in the world of Coming Up Small, that would be fool-on-fool violence—especially given that the Hawks have played only two 2011 playoff teams since Horford went out (and lost to one of them, the Sixers, by 14).

I don’t really see big things in store for either of these squads this year—aside from their odds in the draft lottery.

This entry was posted on Sunday, January 22nd, 2012 at 6:14 am and posted in Atlanta, Atlanta Hawks, Cleveland, Cleveland Cavaliers. You can follow any responses to this entry through the RSS 2.0 feed.
« When Falcons Once Soared
The Cleveland-Duke Conundrum »