Makes me wanna put the whole thing on my hot dog. 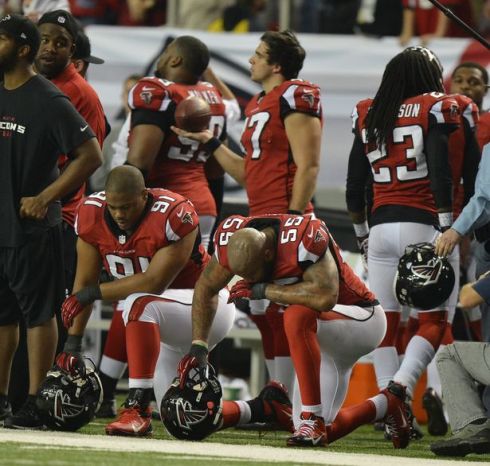 There’s a reason no writer representing San Francisco contributes to this blog: SF teams, more often than not, finish the drill. Atlanta teams, sigh, tend not to. The Hawks have never made it to the Eastern Conference Finals, much less the NBA Finals. The Braves went to the playoffs 14 years in a row and managed only one World Series win—the city’s sole championship. Now the Falcons have reached the NFC Championship game three times and will once again not win the Super Bowl.

But, through three quarters of yesterday’s thrilling NFC Championship Game, it looked like the latest edition of the Falcons could make the franchise’s second Super Bowl appearance. That will not be the case. SF teams come up big. ATL teams come up small.

My worries with the new era of the Falcons, led by the Dimitroff-Smith-Ryan troika, crystallized on November  27, 2011. I never was too bothered by the first two playoff loses suffered by this regime. Losing to the eventual NFC Champion Cardinals on their turf with a rookie QB in his first playoff game was tough, but reasonable. The defeat to the Packers was harder to take, but that team was a buzzsaw.

But, the weekend after Thanksgiving in 2011 was foreboding: The Falcons piled up a 17-0 lead in the first half on the lowly Vikings, who came into the Georgia Dome sporting a feeble 2-8 record, a rookie quarterback who’s ceiling is probably Matt Schaub, and no Adrian Peterson. But, in about a five-minute span, the Falcons gave up two touchdowns, and the Vikings closed the gap to three points. The Falcons would eventually win, but I remember sending a text to a couple friends that read: “The Falcons have no killer instinct. We should have squashed this team. Why is this even a game?”

And, that’s been evident in their no-show in the Wild Card Game against the New York Football Giants last year; several skin-of-their-teeth victories this season over bad teams, including the Cardinals and Raiders; and their two most recent playoff games. The Falcons impressively fast starts against the Seahawks and the Niners have been tempered by equally shocking swoons.

A John Abraham Falcons jersey, on its hangar and heading back to the closet until the fall.

Against the Niners, they failed to score a single point in the second half, after having their way with the visitors in the first quarter of the game. Once again the Falcons only seemed to play offense for one-half of a football game; and however amped their defense was on the first couple series of the game, it was significantly more porous soon after. After letting the Niners recover from a 17-0 deficit and pull to within three points, the Falcons showed some pluck and put together a quick strike scoring drive to go into the half with a 10-point lead.

Maybe today would be different? Alas, it wasn’t. Matty Ice went cold, throwing an interception (that to be fair wasn’t his fault) and fumbling a snap. John Abraham was clearly ineffective—and I think someone needs to take a long look at why he was playing in the fourth quarter of a meaningless game on December 29. The better team, who’d been here before and squandered its opportunity last year, won. People seemed certain the 49ers would be back to avenge their loss; I get the impression that many think the Falcons just blew their one chance.

The fans, from what I hear from several people (including my parents) who went to the game, did their job for the entire 60 minutes. The city has risen up, as it is continually prodded to do, and embraced this team of talented underachievers. I’ve called the Falcons “the most considerate team in football.” They should be more considerate to their fans than to their opponents.

The Mariners have already secured a softer landing in the AL West for 2013, though it’s not thanks to new players Jason Bay, Kendrys Morales or Raul Ibanez. And now it won’t be thanks to sloppy seconds with outfielder Mike Morse, lately of the Washington Nationals, and as of a trade today a Mariner anew.  The thanks lie, of course, with Houston and the hapless Astros, whom Seattle fans are relying on to bring up the AL West rear.

Nonetheless, Morse is a potentially interesting acquisition.  He managed a .291 average last year, with 18 HRs sprinkled in. That average is better than anyone on the Mariners for 2012.

And, like Ibanez, Morse knows what it is to wear teal on your hat and seems to be a fan of Seahawks running back, Marshawn Lynch. 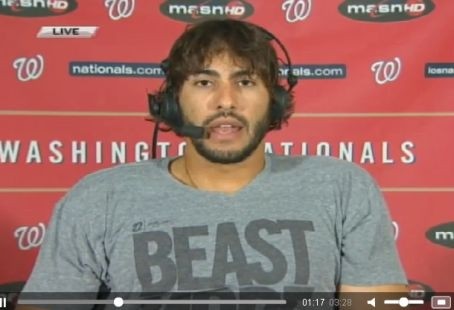 The Atlanta Falcons and the Art of Coming Up Meh

Dunta Robinson looks for something to hold onto while he and the Falcons defense weathered the Seahawks storming back in yesterday’s divisional playoff game.

In earning their league-best 14th win of the season and notching the franchise’s first playoff victory since 2005, the Atlanta Falcons proved that no team in the league takes more care to ensure that their vanquished opponents feel good about themselves.

Most teams—including the lowly Raiders, the QB-poor Cardinals, and the better-than-their-record Panthers—leave the Georgia Dome believing (often with just cause) that four times out of five, they would have won the game they just lost. The Seattle Seahawks certainly have to feel that way after narrowly losing to the Falcons despite coming back from a 20-point deficit by scoring 21-unanswered points in the first 14-and-a-half minutes of the fourth quarter of yesterday’s divisional playoff game. It’s hometown paper apparently does. The Seattle Times went with the relatively chipper headline: “Playoff loss hurts, but Seahawks will be back.”

After the game, all Russell Wilson could talk about was how excited he was for next season. The Falcons didn’t demoralize the seemingly unflappable rookie QB, they emboldened him. Whoops.

At halftime, it appeared that the Falcons, which in three of the past four seasons have come up small in the playoffs, were about to have their coming out party. But, by the fourth quarter the Falcons that we fans have been in an unhealthy relationship with for decades reared their heads, proving incapable of picking up first downs on offense and not surrendering them on D. They won the game on thanks to a drive authored by the aptly named Matty Ice. Great, but, c’mon man, we had a 20-point lead at home with 15 minutes to play?

Falcons cornerback Dunta Robinson put it best, or rather put it as I have many times in the past: “”We’ve got to develop a killer mentality. We don’t put people away well enough when we get the chance.”

A win’s a win, I know, but when you play the Falcons, the NFL’s most considerate franchise, the door’s always open—both to you stealing a win and to the Dirty Birds coming up small.

…But For Those 25 Seconds

Against Atlanta, the Seahawks came up small in many ways today. Like the entire first half. And the Marshawn Lynch fumble. And that 4th and 1 play selection. And their disorganization after that sack.

And, in the end, they came up small with just 25 seconds to spare. 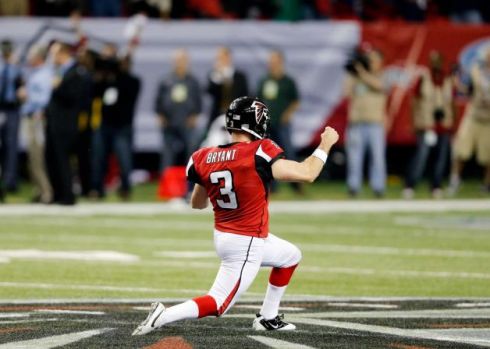 Just a few short months until pitchers and catchers report.

The Redskins Really DO Love Losing to Seattle 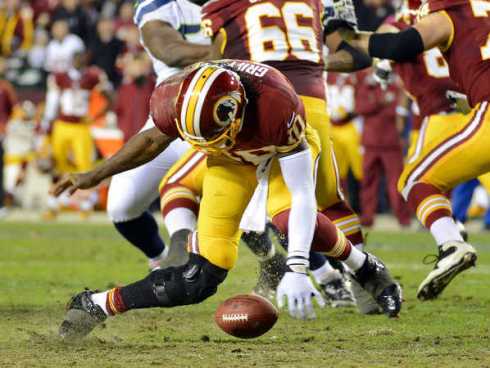 The Little League that Could, but Probably Won’t

It took 113 days of bitterness, mistrust, recrimination and name calling, but as in many a bad marriage, the NHL and its players kissed and made up yesterday, reaching a tentative agreement that appears to have ended the lockout and rescued the 2012/13 NHL season.

Had this weekend’s marathon negotiation failed to resolve the sides’ differences, hockey fans faced the likelihood of losing an entire season to CBA brinksmanship for the second time in eight years. Amazingly, rabidly loyal fans had continued to stream through the gates even after the catastrophe of 04/05. League revenues last year reached a record $3.3 billion. Still, the league clearly had a long way to go even before this year’s lockout. The recently inked 10 year TV deal with NBC pays a paltry $200 million per year. Compare this with the NBA’s current deal, set to expire in 2016, which is worth $930 million annually. But NHL owners don’t seem to mind because they rely on gate receipts (i.e., fan loyalty) for nearly half their yearly take.

How is it, you ask, that a league so dependent on its fans caring enough to show up, and with so much market share yet to gain, could come so near the brink of fan-alienating disaster? The short answer, friends, is that Garry Bettman and his band of merry pranksters run an entire league that comes up small; that’s small as in petty, myopic, and head-scratchingly obtuse; small with a lower-case s. Yes, they’ve put it all behind them for the next decade, but this is still the league that allowed Fox to superimpose comet trails on live action. 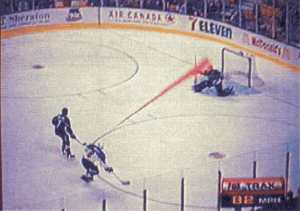 So let’s not waste anyone’s time dissecting the new agreement or rehashing the agonizing negotiations that produced it. And we certainly won’t pat anyone in the league office on the back. Instead, what better way to celebrate the imminent start of the NHL season than by taking a quick look at some even less successful pro leagues. Congratulations, Gary Bettman, you’ve come up bigger, than these guys:

The Redskins and Seahawks face off this weekend in a clash of ComingUpSmall mainstays.  One will come up small.

There are any number of ways to attempt to glean the outcome, including Las Vegas lines, past meetings (see: The Skins Love Losing to the Seahawks, below), road and home records, etc.  We present to you, reader, an alternative means of judging Sunday’s contest.