Has the Hawks Tailspin Begun? 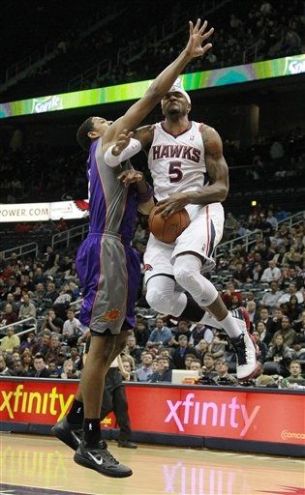 In journalism, there’s a rule for writing stories about emerging patterns: 1, 2, trend. If that holds in basketball, then the Atlanta Hawks are well on their way turning their playoff-caliber record into an invite to the draft lottery. Hate to say I told you so.

The Hawks have dropped three games in a row. It gets worse: All three games were at home. And none of them occurred on consecutive nights. They were down 20-plus points in all three games. None of the teams that defeated the Hawks (the Grizzlies, Sixers, nor Suns) had a better record coming into the games.

The wheels are coming off of the clown car full of dwarves (at least when judged by NBA standards). Horford is out. His understudy, Jason Collins, who basically hacks other teams’ centers for his dinner, is out, as well. Things don’t look good.

Atlanta Journal-Constitution columnist Jeff Schultz says not to panic just yet. Too late. I’m panicking, realizing that the Hawks will not be able to once again properly illustrate the dictionary definition of mediocrity for another year. Instead, they’re speeding toward just shit.

Says Schultz: “The Hawks are a fragile team even when they’re at full strength. Now they’re fragile and teetering on the edge of the top shelf.”

Allow me to be the first to say, “Look out below!!”

This entry was posted on Tuesday, February 7th, 2012 at 9:28 pm and tagged with Al Horford, Atlanta Hawks, Atlanta Journal-Constitution, Jason Collins, Jeff Schultz and posted in Atlanta, Atlanta Hawks. You can follow any responses to this entry through the RSS 2.0 feed.
« Super Bowl in Four Words
Posterized! »