Guest Post: At Least We Went to Playoffs 14 Seasons in a Row 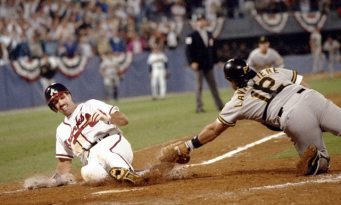 The 1992 National League Championship Series was a high point in a 15-year string of dominance that netted the Atlanta Braves one piddly World Series title.

Excepting those two games played in Japan last week, which no one seemed to notice, I feel confident proclaiming that baseball season is upon us. To mark the occasion, I recruited a very old friend of mine and fellow Braves fan to put together a recap of the greatest decade-plus of sports fandom ever experienced by people who admit to others that they’re from Atlanta. It was also, as you can imagine, one of the most frustrating spells in the history of sports appreciation, as multiple World Series that seemed to be within a tomahawk’s chop of being ours were frittered away (or just stolen).

Below is a quick recap of the period, which we’ll call The Silver Age of Baseball in Atlanta. With that, I’ll turn the reins over:

*Full disclaimer, this blog post was originally written five-plus years ago (on Myspace of all places) on September 25, 2006. Then I deleted it. So, this is somewhat of a reconstruction. I have tried to re-write from memory and maintain as much of the original sentiment as possible.*

The end of the Braves/Mets game last night was an insignificant game in the 2006 season, but was a pretty big milestone in the history of the Atlanta Braves franchise, the MLB, and sports in general. The loss mathematically eliminated the Braves from the postseason, ending a decade and a half of dominance over the rest of the National League and, at times, the entire majors. The Braves won the NL West Division title in 1991 and went on to win another 13 straight division titles. Those 14 years covered the majority of my formative years, and I can usually recall a Braves memory associated with significant parts of my personal life.

After this loss, I thought back on all the seasons and recapped what I remember of the postseason for each division title (yes, postseasons only because outside of a few broken records, fights and mostly lame All-Star games, the postseasons are what really matters). Sadly, it was more lows than highs.

’91 – The miracle season capped off by the greatest World Series ever. Even losing the game 7 could not put a dark cloud on the season. We even had a parade for our lovable losers.
’92 – Two on and two out in the bottom of the ninth. Sid Bream comes lumbering around third and barely beats a weak throw by Barry Bonds. The Pirates franchise goes into a tailspin. The Braves continue their run. Another great season, but with more disappointment in the World Series.
’93 – Another disappointment, this time getting beat by a bunch of hoodlums. This year sealed my intense dislike of all things Philadelphia—specifically, when the Braves’ bus was attacked by fans after the clinching game.
’94 – Shortest season in the run = shortest memory
’95 – Finally! The redemption year! What a game six, with Tom Glavine and David Justice both coming up big. And what a call by Skip Caray on the final out, “Yes! Yes! Yes! The Atlanta Braves have given you a championship! Listen to this crowd!”

’96 – The season’s World Series started off memorable: A scrawny 19-year-old kid from the Caribbean belting two home runs in the opening game, and the Braves leaving New York with a 2-0 series lead and home field advantage. Then Denny Neagle and Jim Leyritz struck. The opportunity truly to dominate the ’90s quickly slipped away. We watched the pinstripes win four straight and celebrate their first WS win 18 years. It would be the first of many I’d have to endure.
’97 – Eric Gregg – the man whose appetite was eclipsed only by his strike zone.
’98 – A truly dominant team entering the playoffs that ran into the buzzsaw that was the ’98 Padres. The errors did not help at all, and it continued the disappointment that was Braves’ postseasons in the ’90s.
’99 – Instead of the ’90s being the decade of the Braves, it belonged to the Yankees. Another embarrassing exit, with the salt in the wound being a World Series sweep.
’00 – Another division title, but still no ring to show for it. The “at least we”-excuses begin. Here: At least we did not lose to the Mets.
’01 – The team that was built on pitching was absolutely destroyed by a team with even better pitching. At least we did not lose in the wild-card round.
’02 – Barry Bonds gets his revenge on the Braves. At least we won another division
’03 – A year marked by an explosive offense, only to be completely shut down by superior pitching. At least we made it to the playoffs.
’04 – The only highlight of this short postseason stint was watching Rafael Furcal hit a home run to help win game 2 against the Astros. As soon as the season ended, he was to start a jail sentence for drunk driving. He delayed it by at least 2 days. At least we made it five games.
’05 – The end, though no one knew it yet. The night the Braves lost to the Astros in extras—after being ahead 6-1. At least we had a good run.

3 responses to “Guest Post: At Least We Went to Playoffs 14 Seasons in a Row”